This is not a pantomine…

Last night The Bloke and I were invited to watch the hilarious Peter Pan Goes Wrong at the Alexandra Theatre.

Co-written by the wonderfully funny Mischief Theatre company members Henry Lewis, Jonathan Sayer and Henry Shields, Peter Pan Goes Wrong is described as ‘a highly physical comedy packed with finely-tuned farce and Buster Keaton inspired slapstick, delivered with split-second timing and ambitious daring.’ It has definitely been on my ‘to watch’ list. 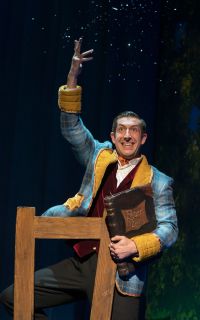 Peter Pan Goes Wrong sees the ‘Cornley Polytechnic Drama Society’ back on stage battling technical hitches, flying mishaps and cast disputes as they attempt to present J.M Barrie’s much-loved tale. Will they ever make it to Neverland?

Nominated for an Olivier Award for ‘Best New Comedy’ in 2016, the show has enjoyed two West End seasons, a tour of Australia and New Zealand and a UK tour, and it is easy to see why. Right from the moment of entering the auditorium we are introduced to a group of stagehands and lost actors that are casually causing chaos amongst the audience, and this sets the precedent for the rest of the show – the fun truly never stops.

Cornley Polytechnic Drama Society performs the most amateur of AmDram productions where everything does indeed go wrong, delivered with absolute precision. Characters are hilariously under and over-acted, costumes changes don’t work, props fail and collapse, the audience is plunged into darkness as fuses blow, the sound cues are disastrous… and I’ll leave the absolute spectacle of Peter Pan taking flight to your own imagination.

A performance this bad can only be delivered with such effectiveness by an incredible cast of enormously talented actors, and each bring something wonderful to the show. Combined with set designs by Roberto Surace, lighting by Matt Haskins and sound by Ella Wahlstrom, it was so beautifully done that I had tears rolling down my cheeks. What makes this show so unique was how it remained consistently funny throughout – I’ve never laughed as much as I did during this performance (to the point where my face was hurting even by the interval).

Mischief Theatre was formed in 2008 by a group of graduates of The London Academy of Music and Dramatic Art (LAMDA) and began as an improvised comedy group. Current productions include: The Play That Goes Wrong (which is now booking into its 5th year in the West End, touring the United States and playing Off Broadway, following a two year run on Broadway and two sold out UK tours) and The Comedy About A Bank Robbery, now in its 3rd year in the West End at the Criterion Theatre and recently enjoyed a nine-month UK tour.

Peter Pan Goes Wrong will be on stage at the Alexandra Theatre until Saturday 22nd February. A donation from every ticket sold is given to Great Ormond Street Hospital. To purchase tickets, visit here.