Last night The Bloke and I were invited to the Press Night of Buddy at the Alexandra Theatre.

Telling the story of the Texas-born rock and roll legend Buddy Holly from his meteoric rise to fame before his tragic death at the age of 22, Buddy has become known as ‘The World’s Most Successful Rock & Roll Musical,’ celebrating it’s 30th anniversary year with a 2019 – 2020 tour. Seen by over 22 million music fans since it opened in London’s West End in 1989, the show has has enjoyed extraordinary success, having played a record- breaking 4450 performances over 556 weeks on tour in the UK and Ireland, as well as 5822 performances over 728 weeks in London’s West End, winning numerous awards along the way.

While Buddy Holly’s career may have only lasted for 18 months, he served as a pioneer within the music industry, being the first Rock ‘n’ Roll star to write his own songs, the first to popularise the two-guitar/one bass/one drum line-up, the first to get involved in production using techniques that would eventually pave the way for the Beatles to develop a similar sound and the first to wear glasses. The show depicts the early struggles of Buddy Holly and the Crickets, their performance as the first white act to play the Apollo Theatre stage in Harlem through their journey to incredible success and Holly’s whirlwind romance with Maria Elena (who he proposed to on their first date). The storyline itself and dialogue is fairly minimal, with much of the production focused more on the songs. 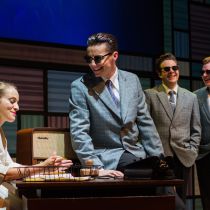 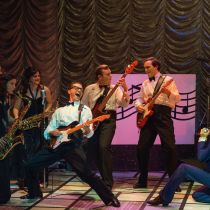 The lead was played by Brummie-born A.J. Jenks (who shares the role during alternate performances) who did a wonderful job, managing to convincingly emulate Holly with superb nuances and encapsulating his famous stammering style. He was joined by Christopher Weeks (who also plays the lead during certain performances), Joe Butcher, Josh Haberfield as the Crickets, and a small cast of incredibly talented actors throughout who all performed their own music, with some taking on multiple characters and instruments. There were some enormously powerful female vocals (Cartier Fraser and Sasha Latoya in particular), note-perfect a capella and a whole plethora of hit rock ‘n’ roll songs including That’ll Be The Day, Oh Boy, Rave On, La Bamba, Chantilly Lace, Johnny B. Goode, Raining In My Heart, Everyday and Shout . Shout out to Miguel Angel in the role of Tyrone Jones who has been in over 1500 performances of Buddy across the UK, USA and Canada since playing Richie Valens in the West End revival of the show in 2007.

The second half is more a full-scale concert than a musical, re-enacting his final show at Clear Lake with J.P. Richardson – the Big Bopper, (played by Joshua Barton) and Richie Valens (played by Ben Pryer) before his fateful plane crash in 1959 in which all three musicians and the pilot died. There’s a rather poignant and emotional moment of reflection at this point before the audience is pulled back into an encore of songs that had them dancing in the aisles, and it was beautifully done.

For Buddy Holly and rock ‘n’ roll fans, this show is an absolute must-see.

Buddy will be on stage at The Alexandra Theatre, Birmingham next from Tuesday 3rd until Saturday 7th March. To purchase your tickets, visit here.

4 thoughts on “Review: Buddy: The Buddy Holly Story at the Alexandra Theatre”