In an effort to inject some positivity into my daily mindset and the online world I have created a Daily Gratitude Challenge and I am inviting everyone to participate. If you have missed my introductory post that explains the challenge and maps out the daily post schedule, visit here.

Day 3 focuses on moments and memories. I take hundreds of photographs wherever I go because I feel the need to record the moments I experience and preserve the memories I have of amazing places and people, but I always make sure to stop and take a few minutes to be mindful of where I am and what is happening. I value the memories that I have, particularly when things are tough. Here are just a select few,

Moments and Memories I am Grateful For:

Note: I haven’t included as many travel memories as there is a specific travel topic later in the challenge. 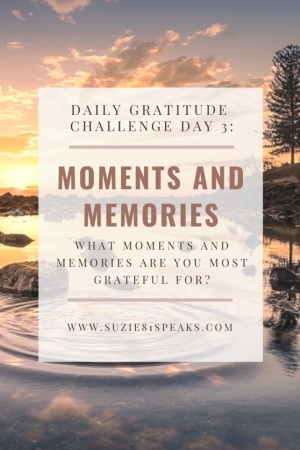 Time I spent with my Grandfather. A northern Englishman to the core, he wore a flat cap and grey cardigans and regularly asked me if I was ‘courting’ anyone (despite the fact that I was 10 at the time). He liked musicals and snooker, made up his own lyrics to songs and whenever visited he always had a little white paper bag with a selection of chocolates for us. He was adopted, and so in 2014 I set out to trace his ancestry and I found his birth mother – it was a fascinating journey and not only gave me a bit more of an understanding as to what his early life must have been like, but a greater appreciation of his kindness despite that adversity that he faced. He passed away when I was 16, and it would have been his 100th birthday last year.

The day I surprised my mum by turning up unexpectedly on my 21st birthday when she thought I was at uni. I loved the look on her face when I told her to look outside her office window.

The cats. When I started the blog I had three, now I have one. It hasn’t been easy, especially after losing one cat at the age of 19 to cancer and another at the age of 10 to Type I diabetes, but I’m grateful for the memories I have of them – knowing that they were always pleased to see me, waking up with one or more them on my chest and staring at me while they wait for their breakfast, ignoring the expensive presents they were bought in favour of batting around bits of paper…

The creative experiences in and around the city. Receiving the email to say I had been invited to the PR list at the Alexandra Theatre in Birmingham. The Bloke and I are massive theatre fans and the first one was the 50th Anniversary of Hair – we have been lucky enough to see a whole bunch of incredible shows since then. The first performance I ever saw of RENT at the Old Rep Theatre is also an incredible memory. I’ve never seen a standing ovation given before a song had finished, and I still get goosebumps whenever I think about it.

Similarly, being surprised with tickets to the 20th Anniversary performance of RENT in London, and crying outside afterwards with a bunch of men from the audience. I also met Anthony Rapp the next day. That whole weekend was amazing.

The marriage proposal I received on a clifftop overlooking Dunnottar Castle in Scotland on a glorious spring morning. The Bloke done good – read the full story here.

The view I had when The Bloke proposed.

Walking down the aisle to Journey’s ‘Don’t Stop Believing’ surrounded by our closest family and friends – classy as always. The registrar made a joke about triplets during the ceremony too.

Sunset over NYC from the Top of the Rock on our honeymoon.

The nights out with friends. Good food, good company, lots of laughs.

Singing along with 98,000 people at the Adele concert at Wembley Stadium in 2017 – it was a wedding present from my sister and we were extra fortunate in that we managed to see her before Adele had to cancel the remaining shows two days later.

The look on The Bloke’s face when he opened his Lego Millenium Falcon on his birthday. I’m terrible at being able to buy presents without getting over-excited and giving it to them early, but I somehow managed to keep this a secret for about 6 months. Amazing.

Meeting Dolph Lundgren. A thirty-year minor obsession was realised when I finally got to meet The Most Beautiful Man Ever Created in person.

Being one of the first to see the Banksy that appeared in Birmingham. I found it within an hour of it being announced, ordered a taxi and the driver and I arrived before most of the news crews. The driver, who came with me to see it later admitted that he had no idea who Banksy was, but he still posed for pictures with me anyway!

The day I handed in my resignation for my teaching job. Best decision I’ve ever made. Similarly, the day that I walked out of the school gates for the last time was equally as amazing.

Want to participate in the Daily Gratitude Challenge?

There are lots of ways in which you can participate in the Daily Gratitude Challenge:

Are we connected on social media?