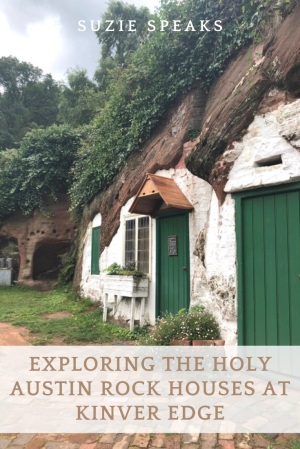 The Bloke and I have been watching George Clarke’s National Trust Unlocked series and were particularly intrigued by his feature on the Holy Austin Rock Houses, especially when we discovered that it was only a forty minute drive from where we live.

Kinver Edge is home to the last cave-dwelling population in England, with a number of cave-houses carved into the local red sandstone.

According to the National Trust, the earliest record of people living in the rock houses is from 1777, when Joseph Heely took refuge from a storm and was given shelter by a “clean & decent family,” describing how the location of the rock houses provided open space and a better quality of air than the village situated below. The houses “warm in winter, cool in summer” and generally dry, had access to water from the well and later, gas, but no electricity. Sanitation was by earth closets.

The 1861 census lists eleven families living in the rock houses, with most of them being rented by people who worked on farms or in local industry at the Hyde Iron Works, the Black Country or Kidderminster. The site became a tourist attraction at the beginning of the 20th century, with visitors being served tea by the local inhabitants from a small cafe that was created on the site.

Unbelievably, they were actually inhabited until the 1960’s, with the cafe remaining open until 1967. After the cafe closed the site fell into disrepair until 1993, when the upper houses were restored based on photographic evidence. In 1996 the lower level – the huge space known as the Ballroom – was made more secure with brick arches and rock bolting, with accurate reconstructions of the doors and windows, fireplaces and chimneys from photographs and a painting as the basis for decoration. Click on the images for the full size. 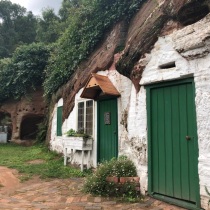 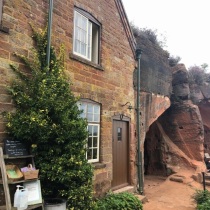 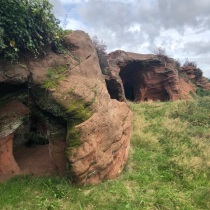 Behind the houses are miles of footpaths, with a walk up to the Hill Fort or a longer ramble to find Nanny’s Rock – further cave-dwellings – in the woods.

The Holy Austin Rock Houses is certainly a unique visitor attraction that is worth a trip. Realistically, the main houses themselves are within a small area and can easily be seen within a short space of time, but there is a cafe and toilet facilities on site and the staff and volunteers and extremely friendly. However, the walks behind extend for several miles. The Bloke and I decided to walk up to the top of Hill Fort where we had a spectacular panoramic view of five counties spanning from the Black Country across the Cotswolds, Malvern Hills, Clee Hills and Long Mynd.

Entrance to the houses is just £5.00 per person via timed ticket only that needs to be booked online and in advance. At the time of writing, tickets are released for the upcoming week on Fridays and – be warned – they sell out quickly!

This site uses Akismet to reduce spam. Learn how your comment data is processed.