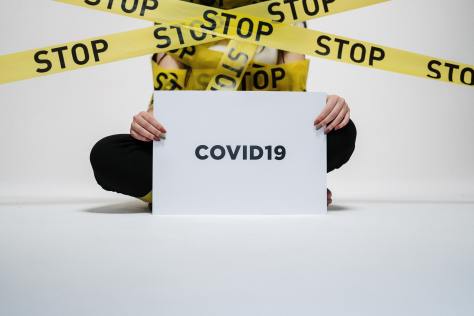 At the start of 2021 I decided that rather than setting my usual series of goals and resolutions I would focus on just one day at a time. After nine months of predominantly staying indoors it seemed a silly notion to look at anything beyond that, particularly in the fact that while a new year had begun, the current situation hadn’t changed.

It was a wise decision – January 2021 seemed like it had decided to throw everything it could in our direction.

The Bloke tested positive for Covid a few weeks ago. He works in a good school and while there are restriction measures in place and the number of students within the building are lower (although higher than you may think), his role as an IT Tech has meant that it was almost inevitable as he has contact with more staff and students than most.

He had noted that he was feeling tired and a little unwell for a little while, but as he had been taking a daily lateral covid test at work that had always been negative it was thought that he was just a bit run down. However, his colleague then tested positive a few days before and on the Friday morning he rang me to say that he had tested positive and that he was coming home and we immediately quarantined him upstairs. An NHS test also showed up as positive, and from that point he deteriorated pretty quickly. He didn’t have some of the classic virus symptoms – he retained his sense of taste and smell and a cough didn’t start to develop until much later – but he had a consistent headache for a week that was so strong he couldn’t sleep or physically get up, he couldn’t eat anything without feeling sick, his temperature was worryingly high and his whole body ached.

I ordered an online food delivery and got together a ‘Covid kit’ that he kept in the room with him: masks and gloves, thermometer, oxygen meter, disinfectant wipes, a large bottle of water so that he didn’t need to use glasses or cups, paracetamol and ibuprofen and small bin liner bags that he could put his rubbish in. As his appetite was non-existent, he had a constant supply of fruit and vegetables that he could snack on without having to try and eat big meals – chopped carrots, apples, bananas, sugarsnap peas, bottles of smoothies etc – and I would make wraps with hummus and salad several times a day as those were the only thing he could stomach those without feeling too sick. I washed bedsheets, towels and pyjamas to make sure that he had clean linen and frequently demanded temperature and oxygen meter readings. I washed crockery and cutlery that he had used and then doused them in kettles of boiling water. The worst point was about seven days after his positive test – his head felt like it was going to explode, he had started to cough and his temperature had spiked, and after a few worried calls to 111 and the GP surgery they delivered some super strong painkillers. Thankfully, these seemed to help and took the edge off the pain slightly.

In addition, two family members were suddenly taken extremely ill and were hospitalised within a few days of The Bloke falling ill.

Thankfully, everyone is now home and on the road to recovery. Both family members are doing ok and after two weeks of isolation, The Bloke ventured downstairs. He still isn’t 100% – he gets tired quickly, coughs frequently if he talks too much and he still feels weak, but it’s a huge improvement from where he was a few weeks ago.

Physically, I’m generally fine. I kept myself downstairs and didn’t get the virus, but that could be because I think I had it last year – in January 2020 I was really ill and had a nasty cough that I couldn’t shake for weeks afterwards. Mentally, however, it’s admittedly been challenging. I’m lucky in that my job allows me to work from home and allocate my own hours, but it did have an impact on the amount of work I was able to get done, and I haven’t even thought about looking at the blog. I spent a lot of the time in a hazy fog – the worry meant I had about 4 hours sleep a night and so was insanely tired – and even now it still doesn’t quite feel real.

It also made me reflect on a number of things, notably how lucky we are. I have practiced daily gratitude for a long time, but this was a point where it became even more important. In comparison to what many have experienced and the fact that so many have lost loved ones to it, The Bloke was lucky. The support network that was available was incredible – one friend went to the supermarket on multiple occasions to pick up things that I had forgotten in my shop, another dropped round a thermometer and ordered me an oxygen meter, another brought round some things that helped her when she had been ill and the nicest homemade loaf of bread I’ve ever tasted that her fiance had made, and all of them braved snow and icy conditions to do so. Every day my phone was filled with calls, text messages, social media messages and emails from family and friends checking how The Bloke was doing. The rent and bills were paid, the heating was on, we had the internet to allow us to order things we needed, there was plenty of food in the cupboards and our health service provided us with medication. I can’t imagine how tough it must be for those who don’t have the same.

For those of you who are still unsure about the existence of this thing, trust me… it’s very real. We have been extremely careful and followed guidelines and restrictions for nearly a year. The Bloke hasn’t seen his family in person for over a year, I haven’t seen my Mum since last March and haven’t seen my sister for nearly eighteen months. The Bloke is a strong, fairly healthy and physically fit man, but this knocked him sideways – in all the time we have been together this was the most ill I have ever seen him.

I look forward to getting back on track and catching up with everyone. Until then, stay safe, look after yourselves and wear a mask!!!