Tasha is the creator and owner of Cookie Crumbs, a blog which documents her life as a wife, mother and creative soul.

Cookie Crumbs is new to Suzie Speaks, but I instantly loved the design and the tag line: ‘Welcome to my mind. Please excuse the mess, I haven’t had time to clean‘. Tasha explains her story in her About Page:

My family and I live in Iowa, where I was born and raised.  Since the birth of our daughter, Addie, I felt the struggle between being a full-time working mother and just wanting to be home with her.  I have gone from a working mom to a SAHM and back to a working mom.  Each poses it’s own set of struggles and joys… END_OF_DOCUMENT_TOKEN_TO_BE_REPLACED

While this story is six months old, I saw this on Facebook this morning and wanted to share it.

A single father took his six year old daughter for a Valentine’s Day dinner, and during the meal was given this note… 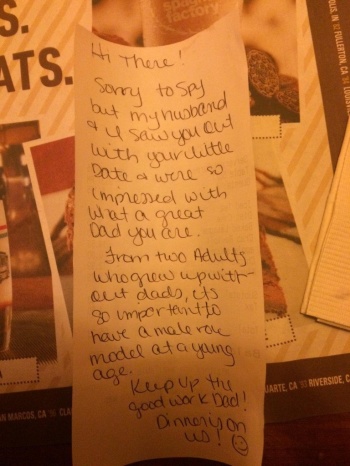 Hi there! Sorry to spy but my husband and I saw you out with your little date and were so impressed with what a great Dad you are. From two adults who grew up without dads, it’s so important to have a male role model at a young age. Keep up the good work Dad! Dinner is on us! 🙂

The note was left anonymously, and the father was overwhelmed by the gesture…

It’s so true that a positive male role model will help young females form healthy relationships with men in later life, and it’s unfortunate and wrong that many stories about men and fathers focus on the negative.

So, for all the wonderful fathers out there – this one is for you!

Being childless, I cannot claim to know how difficult being a parent is, but I have found on many occasions that I have become agitated by the lack of consideration and discipline that children and young teenagers demonstrate when are out in public, and working with teenagers for nearly ten years, I have witnessed numerous examples where parents have made excuses for their children, rather than addressing poor behaviour that the child should have been made accountable for. While I don’t believe that any children are bad, I have judgements in the past, whether rightly or wrongly, when I have observed parents making these excuses. One of my biggest annoyances is the disruption that is frequently caused by children and teenagers when attempting to watch a movie at the cinema, and I have written about this on several occasions.

However, a story appeared on my Facebook feed this morning that made me want to punch the air and shout a resounding ‘yes!’ when I read it. 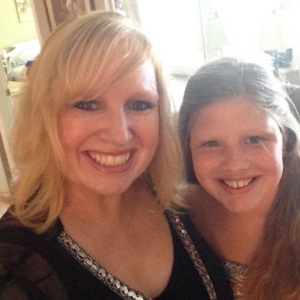 On Friday night, Rebecca Boyd took her 12 year-old daughter to see the new Cinderella movie. Her husband had just been made redundant from his job and this would be the last film that they would be able to see for a while, and they were hoping for an enjoyable time.

Unfortunately, (as I have personally experienced on many occasions), their evening was repeatedly disrupted by two teenage girls who were misbehaving throughout – kicking the seats, talking, giggling – and this continued even when Boyd asked them to stop. At the end of the movie, Boyd sent her daughter to the car and spoke to the teens outside the cinema, explaining how their behaviour affects others and her husband’s situation.

In an interview given with Yahoo!Parenting, Boyd explained that she didn’t blame the teens parents, despite being annoyed by the girls behaviour.

However, the teens mother was furious… at her children. The girls were at the movie with their brother, who told their mom everything. Kyesha Smith Wood, whose daughter and step-daughter were the teens who has caused the trouble posted this to Facebook:

The post went viral, and the comments that Wood received were hugely positive for making her children accountable for their actions.

The post eventually made it to Boyd, who was touched by the response and after connecting over Facebook they hit it off. Since then, both women have been interviewed on numerous occasions, and have demonstrated the upmost respect for each other. Wood told AL.com “A lot of times people get nervous about saying something to a stranger’s kids. We as a community need to hear this, that there are parents out there who still believe in old-fashioned methods.”

And the teens? In an interview with ABC 33/40, Wood explained that they were embarrassed.”They’re humiliated, but that’s ok. I told them, ‘you know what? You’re never going to do it again.’ ”

Both women should be absolutely applauded for their handling of the situation, for supporting each other as parents and for making the girls accountable for their actions. With parents like these, I’m sure that all of their children will grow up to be outstanding young people.

What do you think? As a parent, would you react in the same way?