Whenever I go to London I always research interesting ideas on Pinterest  for places to visit and experience as I find that tips from locals are always much more useful than some of the bigger travel guides. During every search there is always one thing that appears repeatedly: Peggy Porschen Cakes ‘Parlour’, an Instagram haven with a pastel pink frontage, adorned with gorgeous floral displays that change throughout the year.

Opened in 2010 by award winning cake designer, author and Creative Director Peggy Porschen and her husband, the bakery is situated in Belgravia, and I discovered that it was in the vicinity of the station I was travelling from on Monday, so I decided to take a little detour and treat myself to a cupcake (for breakfast – why not!). END_OF_DOCUMENT_TOKEN_TO_BE_REPLACED 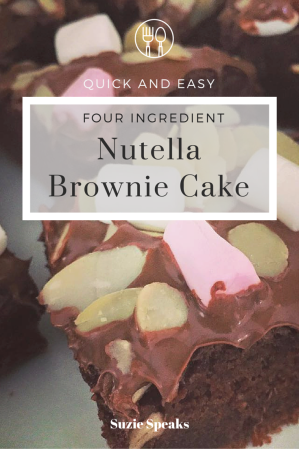 Those of you who follow me on Pinterest may have noticed the amount of things I regularly re-pin on my ‘Desserts’ board. In fact, I can quite easily spend hours salivating over beautiful recipes, making a promise to myself that one day, I would actually bother to try them.

Unfortunately, I’m no Nigella, and while I can cook the basics, baking has never been something I have been particularly successful with. The Bloke, however, thoroughly enjoys it and our cupboards are filled with various trays and things that I have no idea what they do…

That is, until I discovered a recipe for brownies that used only three ingredients – a jar of Nutella (which I can eat just with a spoon), eggs and flour. Bargain. However, as I was following the recipe I found that my own attempts looked nothing like the pictures, so I added my own additional ingredient.

Thirty minutes later, I discovered that my ‘brownies’ had in fact turned into the most beautiful sponge I had ever made. Light, fluffy, gorgeous… Even The Bloke was impressed when I proudly presented him with a large piece, smothered in more Nutella and topped with mini-marshmallows and chopped hazelnuts.

I’ve since tried it twice more, and each time I get the same result, so I thought I’d share it with you. END_OF_DOCUMENT_TOKEN_TO_BE_REPLACED