As a teacher there are certain students who touch your life more than you could ever possibly realise. P and D are two such students.

Both were in some of my very first classes as a newly qualified teacher. P was quite shy and socially a little awkward, but she worked hard and was a high achiever despite dealing with the fact that her mother was dying from breast cancer. D was visually impaired but was often the saving grace in many lessons because of his positive attitude and high spirits, despite finding it difficult in a mainstream school. If I’m being honest, neither of them had an easy time at school from the other students – children can be incredibly cruel. However, they never let any harsh comments or criticism affect their self-confidence and their studies.
Over the years I watched these two grow and develop into wonderful young adults. D was an enthusiastic member of my performing arts and music classes, performing several times in front of his peers. I started teaching P the piano and she discovered that she was naturally musical.

In the year before I left the school, both had to deal with enormously cruel trials and tribulations of life. P’s mother passed away when P was just 15 years old and D was diagnosed with a brain tumour at the age of 16. I visited D after he had started chemotherapy and was so proud of him for his ability to look on the positive side of things. P worked hard during her exams and did very well, continuing her studies into sixth form.
Over the last few years we’ve become close. I no longer teach either of them in school but we keep in touc 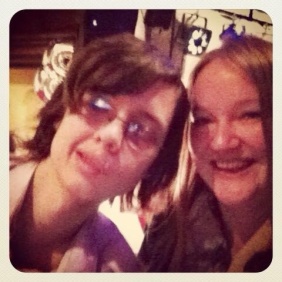 h through texts and Facebook and I still teach P the piano occasionally, workload permitting. When I left the school, I told P that I would take her out for cocktails for her 18th birthday. P and I did the Race For Life together last year while D watched, being too ill to participate. D texts me a lot to let me know how he’s doing and I was delighted to see him on TV not long ago as part of a documentary about the NHS.
Earlier this year, The Bloke and I attended D’s 18th birthday party, which was packed with his family and friends. As promised, on P’s birthday a few weeks ago I took her and D for cocktails at my favourite restaurant, where we had a great time, particularly watching D consume his entire bodyweight in chicken wings and P attempting to balance in her fabulous but ridiculously high shoes. 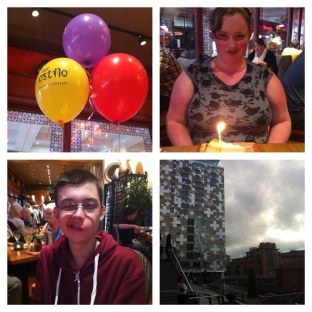 They’re currently doing extremely well for themsleves. D has fought hard against his illness and is in remission. He starts college in a few weeks where he is planning to continue his performance studies and regularly holds fund-raising events to raise money for Cancer Research. P helps out at her church regularly, where her father is the vicar. She has passed her A-Levels and has been given an unconditional offer to her first choice university, where she will be studying theology. What strikes me most about both of them is how happy they are. Yes, they both have their down days, but they pick themselves back up again and make me laugh with their thoughts and musings on life.
These two young people are an inspiration. Both could easily have given up on their dreams and wallowed in self-pity. Both could have blamed everyone else for their adversities and become angry and bitter. Instead, they have grabbed life with both hands and made the absolute most of everything they possibly can.
Their stories and characters serve as superb role-models to the rest of us. On days where I am upset by things that are essentially insignificant in the big picture of life I am reminded that there are always others that are dealing with huge issues and still maintain positivity and goals.  I’m proud of them both and the fact that I’ve been able to be a little part of their journeys. I know that they’re going to continue to be wonderful members of society. They remind me why I do the job in the first place.

I love the title of today’s Daily Prompt – ‘On The Edge.’ It’s certainly how I’ve felt at times this year..

There’s different coping mechanisms that I’ve developed in order to attempt to retain some form of sanity. I use them for different things and at different times – I refer to it as ‘finding my bliss.’

Long hot bubble baths – these are normally perfect in the evening after a long stressful day. Sometimes I’ll simply lie in the hot water and read a book until the water goes cold. Other times require a full pampering session: face mask, deep conditioner for my hair, exfoliation, foot scrub, bath soak… I can quite happily spend hours doing this. I always feel much better afterwards. It’s nice to be able to spoil ourselves once in a while…

Writing. I’ve said this many times before, but when I’m stressed, I like to write. Blogging has certainly decreased my stress level over the last few months. I like the anonymity of it and feel like I am able to truly discuss things that are important (or just plain silly things that I find amusing) without fear of judgement. I generally find it a very therapeutic experience.

Running. The time that I spend running varies – sometimes I’ll set myself little challenges to go further or faster and I often follow the same route. I think about things that have annoyed me that day and mentally beat it up as I move – it’s a brilliant way to release anger and aggression. Unfortunately, I hate it. Even the thought of it makes me die a little inside and I really have to force myself to put my running gear on.  However, when I’m back home, showered (and can breathe properly again) I feel euphoric (my Iron Maiden playlist also helps with this). I actually just got back from a run when the prompt was posted and I’m sitting here feeling good (albeit a bit sweaty) as I write.

Music. This is my absolute passion in life. A fabulous song at any moment is enough to lift the spirits, but I have certain songs that I will listen to in order to relax me and cheer me up. I (very occasionally) play too, but I prefer to listen. I have music playing all the time, and being a music teacher means I have the freedom to include some of my favourite music in my lessons.

A good film. As with music, a film will serve the purpose of making the world disappear for a while. I have a set group of about ten movies that I never get tired of watching. Sometimes i’m in the mood for a good ol’ fashioned ‘chick-flick’, other times I need to have an action film where people get beaten up. When things are really bad, there’s usually only one thing for it: anything that has been made by Disney or Pixar.

Karaoke. Earlier in the year my local pub held a karaoke night on Thursdays and me and the BM became regulars. We got to know everyone and it was an awesome community to be part of. Id return home happy after having a brilliant night. Unfortunately, it was cancelled after only a few months. Every Thursday, I miss it. Occasionally an opportunity elsewhere will come up and we’ll go, and it’s still a fabulous form of stress relief. 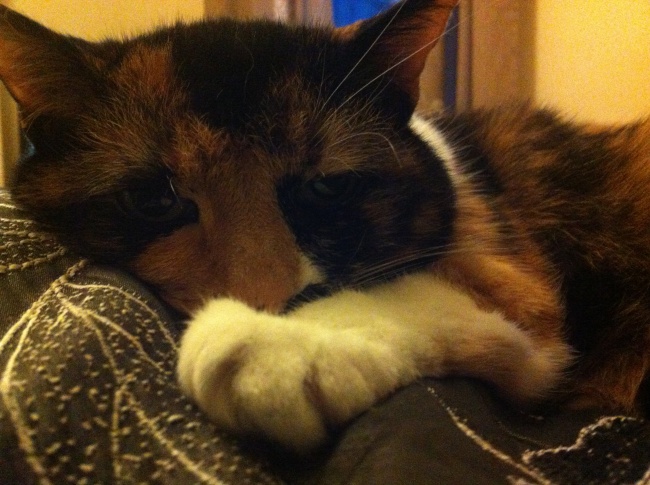 Cuddles. Whether it’s with The Bloke or The Cats, a good cuddle goes a long way. And who could resist this little face?

Fabulous Food. Occasionally on a Friday evening me and The Bloke will go to Bar Estillo, our favourite restaurant. The food is wonderful, the cocktails are fantastic and the atmosphere is lovely. I particularly love the patatas bravas and the Amaretto Sours cocktails, with the white chocolate and dark chocolate mousses with biscotti. Can’t beat it. We always return home relaxed, rested, and usually feeling a little sick.

Friends. A good night with good friends is always good for the soul. I wrote about this in a previous post, and I’ve included the link. I’m very lucky in that i have a wonderful group of friends and I love spending time with them – meeting for meals, drinks, going to the cinema, dancing, fancy dress… They’re certainly an entertaining bunch of people!!

And when I’m in need of a break – I visit my mum (not that I visit her when I’m stressed – I visit her to catch up). She buys my favourite food in, we have a good chat, I have a lovely sleep and I always feel much better. Oh, and the lure of the three gorgeous (if somewhat stinky) dogs that she has helps too.

I’ve loved this poem for years – my mother sent it to me when I was at University.