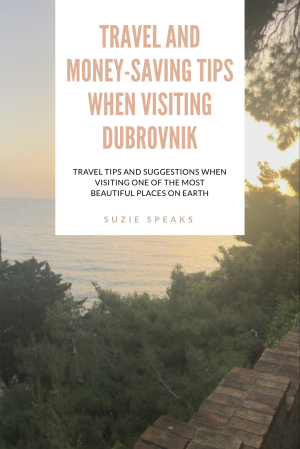 Planned and booked in advance, flights can be extremely cheap. We booked in November to travel in June with EasyJet, flying from London Luton to Dubrovnik for just £75 return. The flight from Luton took just under 2 1/2 hours.

By law, the relevant regulations of Croatia means that the provider of accommodation services in a hospitality facility is obliged to collect and record the personal data of each person using those accommodation services. Essentially, the place where you stay will take a note of your passport and travel details. You don’t have a choice in this. END_OF_DOCUMENT_TOKEN_TO_BE_REPLACED

In June I was lucky enough to travel to Dubrovnik, Croatia, for the first time. As a huge Game of Thrones fan I had been eager to visit for a while, but nothing prepared me for how spectacularly beautiful it was. Steeped in history, clean, safe and with population of friendly and lovely people, it’s an absolute must-see.

While isn’t possible to see everything in just a single trip, here are a few highlights that may help when planning a future vacation of your own. END_OF_DOCUMENT_TOKEN_TO_BE_REPLACED

Open from 8.00am until 7.30pm every day, the Walls of Dubrovnik (Murrales de Dubrovnik) are one of the most spectacular ways to see Old Town and beyond, offering stunning views of the iconic terracotta roofs (added to the UNESCO list of World Heritage Series in 1979), Fort Lovrijenac, neighbouring islands and Adriatic Sea. They are considered to be one of the greatest fortifications of the Middle Ages.

END_OF_DOCUMENT_TOKEN_TO_BE_REPLACED

This morning I was setting up my trackers for my client social media and freelance work for the month and it suddenly occurred to me that it was June. How on earth is it June already? It seems like five minutes ago that The Bloke and I were indulging in our New Years Eve snacky treats and singing Auld Lang Syne while we linked arms with the (rather disgruntled) cat.

The last five months have been really busy: I’ve gained several new freelance opportunities which I’m thoroughly enjoying, we’ve been on a number of day trips to interesting places, got up at 5.30am for each episode of Game of Thrones, watched Hugh Jackman on stage, musical theatre shows, plays and films, interviewed Marco Pierre White and generally had an awesome time. June also promises to be equally as great, with the fifth Annual Bloggers Bash (during which we are making a long weekend of it and being tourists for a few days). END_OF_DOCUMENT_TOKEN_TO_BE_REPLACED