I think I enjoy the build up to the festive season more than the actual day itself. The German Market arrives in the city centre, encouraging us to consume enormous sausages (!!),  hot gluhwein, crepes and pofferjies covered in Nutella, and endless craft based crap that we didn’t realise that we wanted until we saw it. Carols and festive songs appear in all the stores and on every television advert. I get to buy presents for everyone and celebrate with my favourite people. Work finishes for a few weeks. I love it. I love the excitement, the decorations that appear, the atmosphere. Aside from the occasional hot, sunny days that the UK receives every summer, this is absolutely my favourite time of year.

I decided to join in the festive spirit and decorate our tree. The Bloke and I bought a fake one (due to the fact that the cats would attempt to eat a real one) about five years ago from Argos, and each year we diligently take it out of it’s box and joke about the fact that it looks drunk. He set it up and put the lights on it while I was away at my mother’s house ready for my return on Sunday, but as I was feeling rough I didn’t tackle it until yesterday evening. Amidst the box of random decorations that we have collected over the years I discovered something that would provide me with hours of entertainment…

I found the Santa hats.

Two years ago I purchased three small Santa hats for the cats, and I consider the fact that I was able to get a photograph of all three of them sitting together and wearing them to be one of my greatest achievements of that year. Sadly, I lost one of the cats earlier in the year at the age of nineteen, so I decided that The Bloke needed to take her place instead (with an adult sized one, of course – we wouldn’t want him looking stupid, would we?). On went the hats, and out came the camera.

All of them were less than impressed, particularly Daisy when I decided to double my fun.

I eventually stopped laughing, The Bloke stopped rolling his eyes and I got my decorating on. I tried to spend a little more time on it than in previous years, attempting to space them all equally, colour coordinating etc, and after a few catastrophes with bits of tinsel and standing on a few stray decorations that had fallen on the floor, I stepped back to admire my masterpiece. 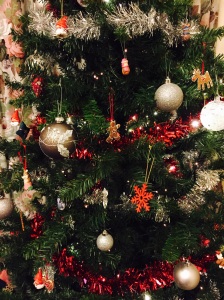 “What do you think?” I asked The Bloke. He turned his head to one side.

Cheers for that dear. Upon closer inspection, it actually wasn’t too bad – for once my little tree seemed to be… Sober!

What about you guys? Have you got any silly traditions within your family during the holiday season?

You can also find my on Twitter and Tumblr @suzie81blog and don’t forget to check out my Facebook page http://www.facebook.com/suzie81speaks

I must admit, I haven’t been feeling the spirit of the impending holidays over the last few weeks. I love Christmas, but I think the pressures of the last few months have taken over and the whole season has snuck up on me, tapped me on the shoulder and screamed in my face when I least expected it.

This all changed today, however, when The Bloke and I decided to go into town and stay there until we had finished getting everything we need. It was quite a dull and miserable day, but we got there early enough to appreciate the German Market before the rest of Birmingham decided to join us and it was actually possible to see what was on offer at the various stalls.

The most popular stall at the market 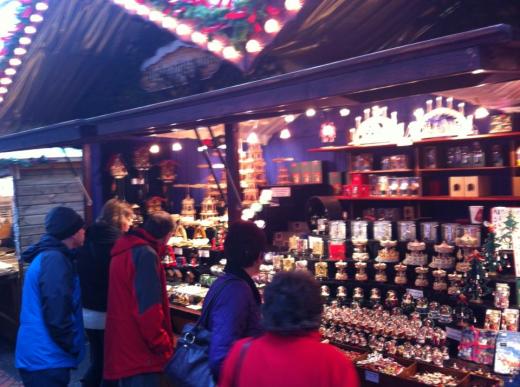 Stuff they never knew they needed… until now!

We were also able to move around successfully in Selfridges, which at this time of the year is virtually impossible. They’ve done an absolutely stunning job with the decorations inside…

I love the lights…

I had a great time – I’ve bought all my presents and finished wrapping them when I got home. I was also able to treat myself a little by spending some of my Waterstones book vouchers that I received for my birthday. I bought Tom Cox’s ‘The Good, The Bad and The Furry,’ as I’ve been an avid follower of Tom and The Bear, his ‘Sad Cat’ on Twitter for a while now (@MYSADCAT). It appears to be customary to post a picture of your purchase with your cat and tweet it to Tom, so I did just that with Wobbly, my 19 year old tortie. She was clearly ecstatic by the early Christmas present…

What a brilliant day! I may even go out again tomorrow to try and get a few last minute surprises for The Bloke – he was with me for most of today and therefore it was quite difficult to get anything for him.

Hope you’re enjoying the last part of your weekend!!