Note: all of the images featured in this post are my own and are set as galleries – click on the images to see the full size.

The Bloke and I have just been to NYC for a week. We have visited once before on our honeymoon in November last year, but as we were there for just over four days we wanted to go back and attempt to see as much as possible that we had missed last time. We chose to go at the beginning of September – arriving on the Saturday of Labor Day weekend – with the hope that the city would be slightly quieter and the following week was back to school.

We wanted to experience both the tourist and non-tourist places, so I spent several weeks before reading blogs and watching vlogs about everything to see and do, mapping out our activities according to each day. This wasn’t set in stone and would allow us to change each daily plan around according to the weather.  END_OF_DOCUMENT_TOKEN_TO_BE_REPLACED 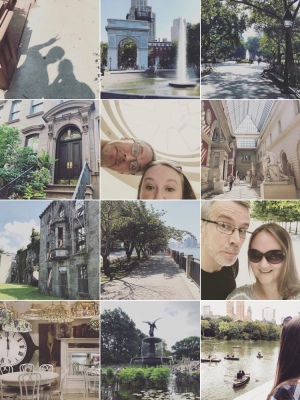 It has been a little while since I last posted, predominantly because I’ve been on holiday in New York. The Bloke and I visited just under a year ago on our honeymoon, but as we were there for just over four days we decided to go back for an extended period of time and try and see some of the things that we missed.

We travelled by subway, water taxi and cable car. We saw a ridiculous amount of movie locations and sweltered in the intense heat. I ate a Cronut, gay ice-cream, pancakes, slurped on the most amazing pink lemonade and developed a rather worrying Snapple addiction. We missed an appearance by Hugh Jackman and Neil Patrick-Harris at different points, laughed (and almost cried) at Kinky Boots on Broadway and got a crick in our necks from looking skywards for so long.  END_OF_DOCUMENT_TOKEN_TO_BE_REPLACED

The Bloke and I recently visited NYC on our honeymoon and had an absolutely incredible time. It’s a fast paced, exciting and vibrant city that has interesting things to see and do on every block, but it isn’t possible to do it all in just one visit, particularly on a limited budget.

It is worth noting at this point that we were staying at a fairly centralised hotel – Hotel @ Times Square on West 46th Street, near 6th Avenue, so it was possible to easily walk to a number of the locations we visited on the first few days, but the subway is efficient enough that it is easy and inexpensive to get from one side of Manhattan to another in a short space of time. END_OF_DOCUMENT_TOKEN_TO_BE_REPLACED

As I sit on the train on the journey back from Heathrow I can’t actually believe our honeymoon is already over. We stayed for 5 days in New York, and with the time difference it worked out that we did a day in London beforehand too.

Getting to NYC was a bit of a nightmare, and the flight back wasn’t much better, but the rest has been totally and utterly fabulous. It’s been a whirlwind of travel and people and sightseeing and noise and VERY cold weather, and I’m absolutely exhausted, but it was a wonderful experience. My back aches, my feet and legs hurt, my gloves are shredded but my phone and The Bloke’s camera are now full of pictures and I have a million memories to cherish and write about.

Here were just some of the highlights… To see the images in a full screen simply click on them. END_OF_DOCUMENT_TOKEN_TO_BE_REPLACED

If I’m being honest, I struggled after Christmas for a little while – The Black Dog and anxiety reared their ugly heads without any warning and I spent a little bit of time consciously focusing on self-care and busying myself with little projects to keep my mind occupied. I’ve become a little obsessed with the Hygge movement, albeit a little later than everyone else it seems, and it really helps. Thankfully, it slowly dissipated and by the time New Year arrived I was feeling a little better. END_OF_DOCUMENT_TOKEN_TO_BE_REPLACED

At the very top of my Bucket List was one thing:

I had spent my teenage years watching American programmes like Sex and the City and Friends, and had started to develop a little obsession with going there, to the point where I had books and posters all over the house.

After I qualified as a teacher I started working at a secondary school. I had only been there for about a year when I heard that the history department were planning an American History and Politics trip to New York, Philadelphia and Washington, and after several months of nagging and annoying the trip leader he eventually agreed to let me join.

And so it was I found myself stood outside a hostel around the corner from Madison Square Gardens at 3.00am during the Easter holidays of 2010, accompanied by seven other members of staff and 56 children, all of whom were tired and clutching suitcases that were stuffed with far too many items of clothing for a week – long trip.

The itinerary had been planned right down the the minute with the plan to see and do as much as possible in the three days that we had scheduled. We kept to it – we went up the Empire State Building and the ‘Top of the Rock,’ visited Times Square (several times), took the Staten Island Ferry and saw the Statue of Liberty, played volleyball on Coney Island, shopped at Macy’s, the Apple Store and Bloomingdales, and we walked. And walked. And walked some more. We walked through Central Park, paid our respects to John Lennon at Strawberry Fields, we walked around Wall Street and through to Ground Zero, where the new tower had just started construction, we walked around Washington Square and listened to the amazing street performers. I saw works of art that I had previously studied at the MOMA and The Met. In our bright red waterproofs with the school logo printed in the front we were the ultimate tourists – my feet were swollen and blistered but it was absolutely worth it.

A very happy doorman at the Empire State Building

On the fourth day we travelled by coach to the National Constitution Centre in Philadelphia, stopping along the way to run the the ‘Rocky’ steps. Unfortunately, I was quite a heavy smoker at the time and so my running consisted of ‘run halfway, stop to avoid passing out and then run the rest.’ We then travelled to Washington, where we were staying at a hotel in the centre of the city.

After spending half a week in a bunk bed in a hostel I was delighted that my room not only had a double bed, but a bath. It was dark by the time that we had checked in, eaten and unpacked, and so we went for a walk to see the White House and the Washington Monument. We didn’t get back until late and so it was decided that the next day would be a lazier start to the morning. I woke up early and while everybody else was getting ready I went in search of some cigarettes, and managed to buy some in a waffle store opposite Ford’s Theatre.

We spent the next few days following the itinerary as scheduled – we visited the Smithsonian museums, sat in the gallery during a congressional debate (during which our trip leader was told off for falling asleep) and the older students were delighted to see some of the politicians that they had been studying as part of their course. We visited the ‘Newseum’ where I says the antenae from the Twin Towers, sections of the Berlin Wall, John Dillinger’s death mask and some of Elvis Presley’s costumes. We played rounders on the grass, during which lots of Americans stopped to tell us that we were playing ‘baseball’ wrong. At night we visited the memorials. One of the greatest experiences of my life was sitting on the steps of the Lincoln Memorial, overlooking the Washington Mall – it was dark, clear and warm and I found it almost impossible to take in the sheer significance of where I was.

The Lincoln Memorial at night

On our final day, when we were eating breakfast, our trip leader received a phone call. The Icelandic volcano Eyjafjallajokull had erupted, causing all planes to be grounded, including the one that was supposed to fly us back to England. We weren’t going anywhere. In fact, the travel insurance company couldn’t tell us when we would be able to leave, and had paid for us to stay for another week in the hotel.

After spending the previous week following a strict itinerary, we decided to relax a little. We visited things that we could have only dreamed of before – the Holocaust Museum (which I had to go to the toilets to stop myself from crying in front of the students), we went to Alexandria and Georgetown, and we visited Arlington Cemetery. It was the best possible situation – the travel company paid for our food and accommodation and the hotel allowed parents to wire over more money to students, even though they didn’t need it.

One morning I received a phonecall in my room at the hotel:

Him: Hi there, could I speak to Mr … (Our trip leader)

Me: I’m sorry, you have the wrong room, but can I pass on a message?

Him: my name is B, I am calling from The White House.

I almost dropped the phone. We had tried to get into a tour previously but were disappointed to discover that this needed to be booked several months in advance.

Him: We saw your story in the Washington Post and we would like to invite you and your group for a tour of the White House…

It turns out, the Washington Post had heard about our situation and had written a short article about us. The next day we were lined up outside the White House entrance with our passports, excitedly waiting to go in. Some of the students were convinced that we would see Obama, and were sorely disappointed when we saw his helicopter taking off.

And there I was, walking around the lower floor of the White House, staring at portraits of Presidents gone by that I had only seen previously on the television or in books. What an experience. 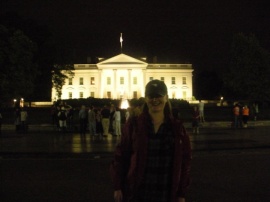 Outside the White House

We discovered later that the ash cloud had cleared and we would be on a flight in two days time. Not before, however, we attended the ‘Earth Concert’ on the Washington Mall, during which we watched Jimmy Cliff, John Legend and Sting perform.

Our return to the UK was just as eventful. Only one coach showed up, leaving a small amount of the group behind to wait several hours for another coach, and on our return to school we were faced with local TV crews who did news reports on our American adventure.

Oh, and the final thing we were told upon our return after only nine hours sleep in two days and a 5000 mile journey? We had an OFSTED inspection the next day…

What about you guys? Have you ever been stranded anywhere?

This weeks Travel Theme is ‘big’… These are my interpretations.

The set for Bon Jovi’s latest tour – I saw them at Villa Park a few months ago. 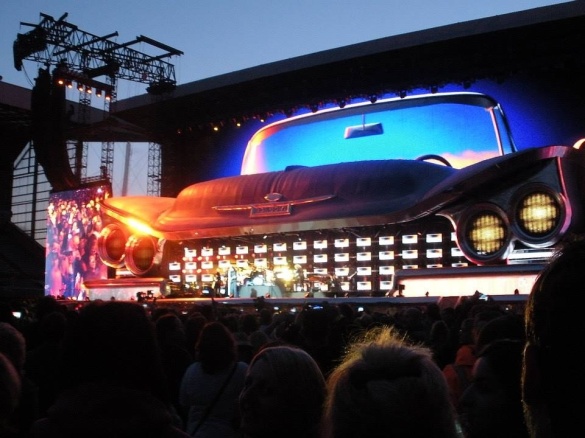 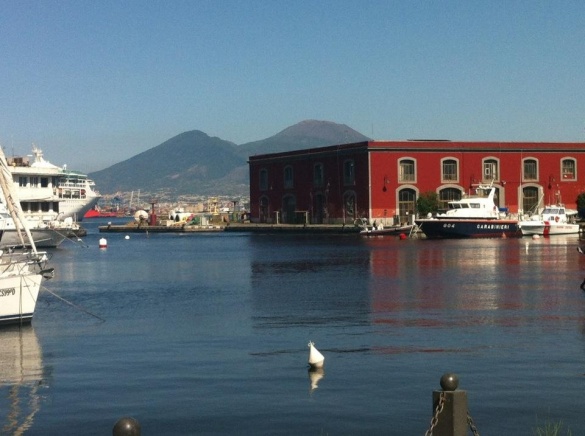 The new Central Library in Birmingham 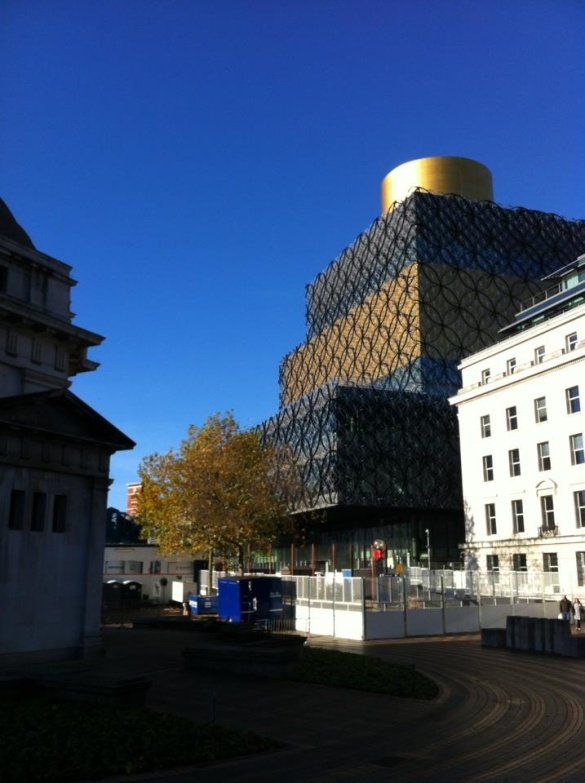 The Travel Theme for this week is ‘Architecture’ and I couldn’t be more excited about it. You may have seen some of these before, so I apologise, but I love these photographs, all of which I took on my travels over the last few years.
Concorde, Paris 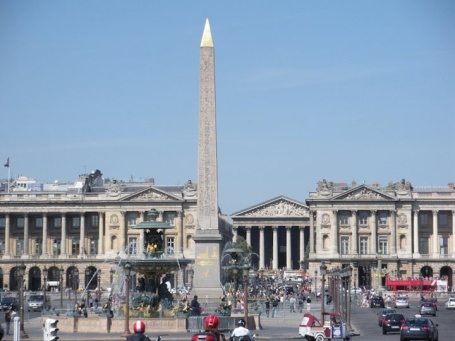 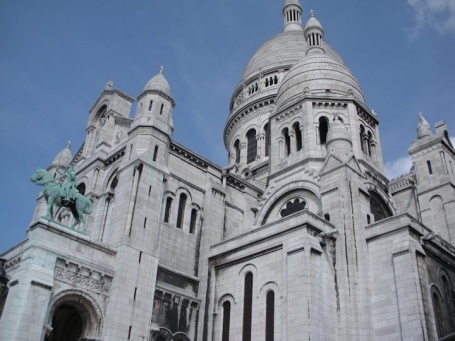 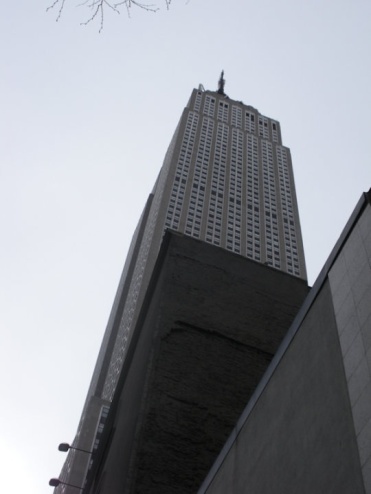 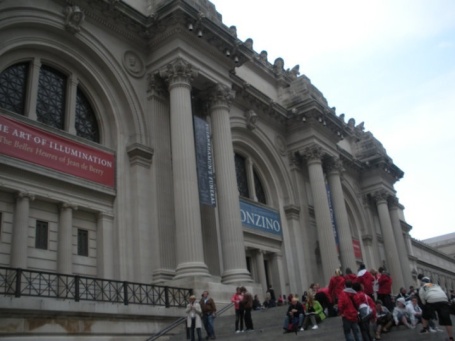 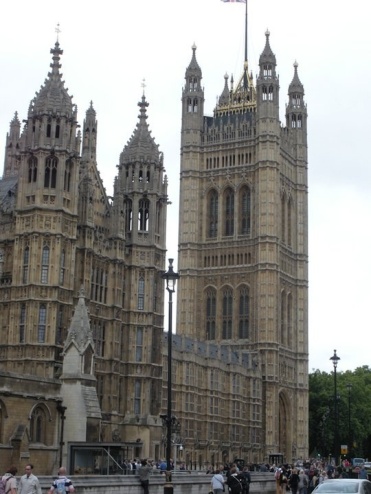 The view of London, taken from the London Eye