Axani and Gallagher in Bangkok

I hate watching the news. The world seems to be an increasingly violent and depressing place and each new day brings stories of cruelty, hatred and injustice that leave me feeling helpless and in despair of humanity. However, every so often I will see a story that reminds me that there are still wonderful people out there…

Last year, Canadian Jordan Axani and his girlfriend, Elizabeth Gallagher, booked a three week round-the-world vacation for the Christmas holidays, but then they broke up before the trip took place. However, instead of letting the spare ticket go to waste, Jordan turned to Reddit in an attempt to find another Canadian girl with the same name as his ex who was willing to join him. Asking for nothing in return, his criteria was simple:

1. Be sane, smart and (hopefully) interesting.

2. Have always wanted to travel, but maybe haven’t had the opportunity or cash to see much of the world.

3. Be named Elizabeth Gallagher and have a Canadian passport.

4. Be ready for a rather spontaneous life experience that will, one day, be an epic story that you’ll tell your kids.

5. Pay it forward. I’ve been lucky in life and this is me giving back to the universe. Do something similar today.

The story went viral, Axani received thousands of applications and the lucky recipient was a 23 year old student, Elizabeth Quinn Gallagher, from Nova Scotia. Gallagher, who has a boyfriend (apparently he wasn’t hugely impressed with her plans to spend Christmas with a complete stranger), initially thought the idea was a little crazy, but was quickly put at ease by Axani in a number of conversations over the phone. They met in the airport departure lounge at Toronto on 21st December and visited eight different places – New York, Milan, Venice, Prague, New Dehli, Khao Lak and Hong Kong, before returning on the 8th January. Because Axani stopped planning the trip further when he and his ex broke up, there were no hotel rooms booked, but when Marriott International heard about it, they provided separate rooms at each stop of their journey. 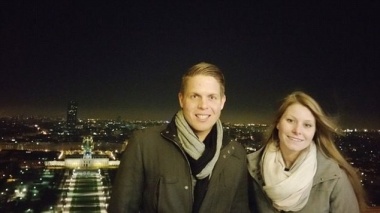 It seems that they developed a great friendship, joking on their return about Axani’s fear of heights and Gallagher’s frequent ability to get lost, they had a wonderful time and I’m pleased for them both.

However, the beauty of the story doesn’t stop there. Axani was inspired by incredibly touching message that he received from and eight year-old boy who was losing his sight and wanted to see the world before he lost his vision completely, and has now set up an charity organisation with his brother called A Ticket Forward to help people travel but don’t have the money.

What a wonderful story, created by a kind and generous person. Perhaps there is hope for humanity after all!

If you wish to make a donation to A Ticket Forward, simply click this link