From the Tony Award-winning creators of ‘Cabaret’ and ‘Chicago’ – John Kander and Fred Ebb – Curtains tells the story of Jessica Cranshaw, the talentless star of the new Broadway-bound musical Robbin Hood – who has been murdered on stage on opening night, and the entire cast and crew are suspects. Time to call in the local detective – Frank Cioffi – who just happens to be a huge musical theatre fan. With a nose for crime and an ear for music, Frank has his work cut out trying to find the killer whilst giving the show a new lifeline. END_OF_DOCUMENT_TOKEN_TO_BE_REPLACED Yesterday The Bloke and I went to see 9 to 5 the Musical at the Alexandra Theatre in Birmingham.

Based on the 1980 hit American comedy movie, 9 to 5 tells the story of Doralee, Violet and Judy – three workmates pushed to boiling point by their sexist and egotistical boss. Concocting a plan to kidnap and turn the tables on their despicable supervisor after he blackmails them, will the ladies manage to reform their office – or will events unravel when the CEO pays an unexpected visit? While the film was released nearly forty years ago, many of the issues highlighted are still a prominent part of social commentary, particularly on the topics of equal pay and roles and treatment of women in the workplace.

Louise Redknapp plays Violet, a smart and ambitious senior office administrator and widow who is overlooked for a promotion in favour of a man that she trained. She is absolutely perfect for the role – strong, confident and self-assured with a beautiful voice and a presence onstage that demonstrates why she has had such a long and successful career as a performer.

She is joined by Amber Davis in the role of Judy, who has been forced to find a job for the first time after her husband has left her for his secretary. Made famous by her appearance in Love Island, I was admittedly a little dubious about the casting choice, but she quickly dispelled any doubts with a truly incredible performance – sweet, funny and making her own way in a new world, Davis has an absolutely sensational voice. END_OF_DOCUMENT_TOKEN_TO_BE_REPLACED

Last night The Bloke attended the Press Night of Singing in the Rain at the Alexandra Theatre. Additionally, I was lucky enough to be able to interview the lead actor in the show (who happens to be an ex-student).

Singing in the Rain is this years’ Stage Experience production, which every year sees over 100 of the brightest young talent from across the Midlands put on a professional show. In just two weeks, with the support of professional industry creatives and technical staff, a full scale production is brought to life on stage. Previous Stage Ex alumni include Brummie comedian Joe Lycett (who performed for several years in the scheme) and musical theatre star Liam Doyle, who went on to leading roles in West End hits such as Wicked, Mamma Mia and Legally Blonde. END_OF_DOCUMENT_TOKEN_TO_BE_REPLACED 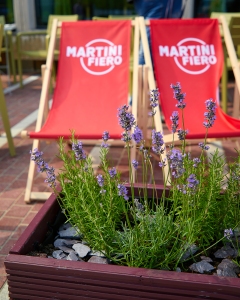 The Bloke and I were invited to the newly revamped Marmalade restaurant at The Rep in Birmingham last week.

The Marmalade team have been working closely with local businesses and artisan suppliers to provide customers with an all new dining experience that is inherently Brummie and combined with a new outdoor terrace that is capable of seating up to 200 people overlooking the recently developed Centenary Square, it is perfectly situated for both lazy summer lunches and date nights.

I liked the fact that the menus are environmentally conscious, utilising local suppliers with a focus on low environmental impact, including the use of heat exchange technology to reduce energy consumption and natural wetland systems. END_OF_DOCUMENT_TOKEN_TO_BE_REPLACED

Last night The Bloke and I went to watch Amélie the Musical at The Alexandra Theatre, Birmingham. The 2001 Oscar-nominated film is to date one of the biggest international successes for a French movie and is renowned for its feel-good and whimsical story, which the musical version closely follows. This beloved story of an imaginative and shy romantic with a gift for helping others, in a vibrant re-conception with new orchestrations and has garnered critical and public acclaim leading to a sell-out season.

Amélie is the story of an astonishing young woman who lives quietly in the world, but loudly in her mind. She secretly improvises small, but extraordinary acts of kindness that bring happiness to those around her. But when a chance at love comes her way, Amélie realises that to find her own contentment she’ll have to risk everything and say what’s in her heart. Although times are hard for dreamers, Amélie is someone to believe in… END_OF_DOCUMENT_TOKEN_TO_BE_REPLACED

The road to happiness is a bumpy ride…

Last night The Bloke and I were invited to watch Little Miss Sunshine at the Alexandra Theatre in Birmingham. I’d heard lots about the film, but almost nothing about the musical. I was intrigued by the plot:

The Hoover family has more than a few troubles, but young Olive has her heart set on winning the Little Miss Sunshine beauty contest. When an invitation to compete comes out of the blue, the Hoovers must pile into their rickety, yellow VW camper van. Can it survive the 800-mile trip from New Mexico to California – and more importantly, can they? This inventive and uplifting musical celebrates the quirks of every family, the potholes in every road, and the power of overcoming our differences. END_OF_DOCUMENT_TOKEN_TO_BE_REPLACED

As July has seemingly appeared from nowhere it occurred to me yesterday that over half a year has slipped by.

I’ve never really focused on a mid-year check-in before. I actively track my stats, growth and client data every month in my Bullet Journal which allows me to see progress over a long period of time, but any goals and plans I usually set are long-term (often with a deadline of twelve months).

At the point where I decided to take blogging more seriously I had two goals that were my sole focus: to replace my teaching job with my own social media business, and to hit a million views, and I worked incredibly hard to achieve them. Once I had done both, it was almost like the fire went out – I made the crucial mistake of not setting something meaningful to work on. Admittedly, I took my foot off the gas, sat back and coasted along because, quite frankly, it was easy to stay in my comfort zone and within the deliriously happy little bubble that I had built for The Bloke and I. END_OF_DOCUMENT_TOKEN_TO_BE_REPLACED

Last night The Bloke and I were invited to go and see the The Rocky Horror Show at the Alexandra Theatre. It’s one of my favourite musicals (this being the third time that I have seen it), but my fifteen year old former self was particularly enthusiastic about the casting of Blue’s Duncan James in the roll of Frank’n’Furter and A1’s Ben Adams as Brad. Additionally, we were treated to pro dancer and performer (including as a pro dancer and winner on Strictly Come Dancing) Joanne Clifton, the ever fabulous Brummie Alison Hammond as the Narrator for the Birmingham shows only, and the incredible Kristian Lavercombe who was also reprising his role as Riff Raff, following more than 1300 performances in The Rocky Horror Show around the world. Indeed, he played the role in the last Rocky Horror performance that I watched and did a brilliant job.The Rocky Horror Show first began life in 1973 before an audience of just 63 people in the Royal Court’s Theatre Upstairs, and tells the story of Brad and his fiancée Janet, two squeaky clean college kids who meet Dr Frank’n’Furter by chance when their car breaks down outside his castle whilst on their way to visit their favourite college professor. The fact that it is outrageous and has a questionable plot doesn’t matter – the iconic songs and fishnets galore provide a brilliant theatre experience, and I couldn’t wait… END_OF_DOCUMENT_TOKEN_TO_BE_REPLACED

Last night The Bloke and I were invited to watch a production of The House on Cold Hill at the Alexandra Theatre.

Adapted from the best-selling 2015 novel of multi-million selling author Peter James and based on his own experiences of a haunted house, the play is a ghostly thriller that tells the story of the Harcourt family – Ollie, Caro and daughter Jade – as they move from Brighton into their dream house in the country that has stood empty for the last forty years. As they begin to sense that they aren’t the only residents at Cold Hill, their new residence quickly turns into the stuff of nightmares… END_OF_DOCUMENT_TOKEN_TO_BE_REPLACED

Last night I was invited to see Hair at the Alexandra Theatre in Birmingham. After winning the 2018 WhatsOnStage award and direct from a sell-out London run, the 50th Anniversary tour stars Dancing On Ice 2018 Winner Jake Quickenden as ‘Berger,’ Daisy Wood-Davis (Hollyoaks / Dreamboats and Petticoats) as ‘Shelia’ and Marcus Collins (X-Factor Finalist / Kinky Boots) as ‘Hud.’

Set in 1967, Hair tells the story of a group of politically active and sexually liberated  hippies – the ‘tribe’ – living a bohemian life in New York City. Claude, Berger, their roommate Sheila and their friends struggle to balance their lives against society and their conservative parents in ‘the Age of Aquarius,’ united in song as they rebel against the American flag and conscription of one of their own – Claude – into the Vietnam War. END_OF_DOCUMENT_TOKEN_TO_BE_REPLACED