After reaching my heaviest ever weight last week, I decided that I was going to stop blaming the scales and do something about it. I’ve cut back on the rubbish that I have been eating, substituting it for healthier options (I discovered quinoa – there’s a sentence I never thought that I’d say) and this morning I decided to go for a run.

A few years ago, just before my 30th birthday, I bought myself a stunning designer dress in preparation for the party that I had organised. I had never spent that amount of money on an item of clothing before (or since – my diabetic cat and her vets bills have seen to that) but I decided to treat myself. The dress was just a little bit too tight for my liking and showed all the wrong lumps and bumps, but it gave me the ultimate motivation to lose the weight that I had been procrastinating about for months. I bought some decent running shoes and several times a week I ran up and down my local park with my best friend, puffing and spluttering my way through it in a manner that closely resembled Phoebe from Friends.

I hated every minute of it, but over time it got easier and I discovered that after just a few weeks I could do 5k with relative ease. My plan worked – I managed to lose just enough weight to feel comfortable in the dress and I thoroughly enjoyed wearing it. 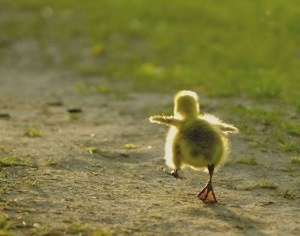 Two years later, I’ve gradually slipped into old habits, and have not only put the weight back on, but I’ve added an extra 15lbs that snuck up on me and slapped me in the face when I stood on the scales recently. I’m pretty ashamed of myself. My dress now doesn’t even go past my hips, and this has prompted me to set a goal over the summer to change my lifestyle, lose the weight and wearing the dress again – it’s too beautiful to be just sitting in the wardrobe. So, this morning, I put on my running gear, set my Nike app, my 5K tracker and my playlist and did some warm up exercises. It was a glorious morning and the park next to my house was almost deserted.

Thirty minutes later, I arrived home. I had completed just 2km and burned 153 calories walking and running in timed intervals. Just like two years ago, I hated every single footstep – the only saving grace being the awesome playlist that I had set myself. My face appeared to have been replaced with a bright red, sweaty tomato with eyes, my legs were jelly, my chest was burning and I almost felt like I was going to be sick.

Still, everyone has to start somewhere! Here’s to a sweaty summer!

What about you? What’s your exercise of choice?

This weekend has been fabulous. After a LONG week of shows in the evening, on top of a full teaching timetable and having to do both with a really nasty head cold, I hit Friday night with a feeling of utter exhaustion and relief that the weekend was here. I certainly made sure that I enjoyed myself:

On Friday night I went to the pub with my friend NW for a well-deserved drink. Me and The Bloke then watched all our favourite TV shows that we’d missed over the week: Hart of Dixie, Big Bang Theory, The Apprentice, For The Love Of Dogs etc.
I slept until 9.30 on Saturday morning. The Bloke brought me breakfast in bed and then went into town. My hayfever has been quite bad, so I walked to the chemist in glorious sunshine and got antihistamines. The rest of the afternoon was spent blogging and sleeping.
The Bloke returned with my favourite ice-cream: Cookies and Cream Haagen Dazs I ate it whilst watching ‘OZ’, which I quite enjoyed.

I slept in until 8.30am on Sunday morning. I made us breakfast, and then we went to watch Despicable Me 2 at the cinemas, which was hilarious. I love the minions.

We then had lunch at Frankie and Benny’s, joined NW at the pub again where we sat in the beer garden and listened to a live blues band and Formula 1 on the TV outside, returned home, put some washing out and spent the rest of the day relaxing.

To add to it further, for the first time in 77 years, a Brit, Andy Murray, won Wimbledon. Like I felt pride for our Olympians in London last year, I’m feeling the same pride for him today. He thoroughly deserved it.
This is what weekends are made for. This level of sunshine and heat is rare in the UK and everybody was outside enjoying themselves. The only trouble is that it makes me less than enthusiastic about work tomorrow…