I went to the pub yesterday after work to meet my friend. It has been a challenging time for her – after ending her relationship of eleven years she has had to move house and adjust to living on her own for the first time since she moved to Birmingham in 2001. Understandably, she’s been through the whole spectrum of emotions, but yesterday I noticed that there was a slight change in her – it was the first time that she hadn’t mentioned her ex and she seemed much more settled. Just before we parted ways to go home, I recalled a conversation that we had just after the break-up, where she said that she wished she could use a time machine to skip ahead by six months just so she wouldn’t have to go through the process of changing her life. Six months later, she’s at the point where she wanted to be – she’s established in her new home, she’s enjoying her own company and she has reached a point where she doesn’t think about her ex every day. I’m proud of her – she’s been so strong and I’m glad everything is beginning to work out. She deserves it.

I can totally relate to her sentiments all those months ago. I want a time machine too.

I have just six weeks left until I leave my job. I have a plan for how I want my new life to be, but it seems that every time I take a step forward something intervenes and pushes me three steps backwards. While I often live life by the proverbial seat of my pants, being far too disorganised to plan effectively in the way that others appear to do, I have had to ensure that my decision to quit a permanent, full-time post will not have a financially devastating impact on the life that The Bloke and I live. I’ve saved every penny I can and have been living off as little as possible, I booked meetings with important people who are offering me exciting employment opportunities and I finally started to see a small light at the end of the tunnel. The Bloke and I have even started saving up for our first holiday in five years. Normally, because of my contracted hours, we have always had to plan any trips during the school holidays as I am not allowed time off during term-time, but we realised that we wouldn’t have the same restriction this year. We decided that we were going to get a package deal to somewhere in Europe in September – it’s much cheaper and there would be no children around as they would be at school, and we found an offer for the beautiful Greek island of Kefalonia (watch Captain Corelli’s Mandolin to see just how stunning it is). 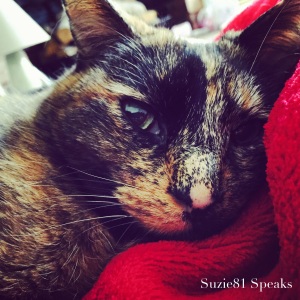 However, this week has been a continuous battle. The meetings that were booked weeks ago were cancelled, my workload has been utterly ridiculous due to the fact that it is exam season, all of the coursework has to be finished and we have two major performances (including a musical theatre production) that happen within a week of each other. To add the icing on the cake, my cat, Daisy (who will now be referred to as ‘Daisy, The Dream Killer’) needed emergency dental surgery, taking a portion of my savings – essentially the money we had put away for the holiday, so now we have to start again. Consequently, the anxiety, panic and insomnia has returned and I went into what I consider to be ‘survival mode,’ getting through each day an hour at a time instead of looking at the big picture. I’ve breathed a sigh of relief as I’ve walked through the front door to my home every evening, and congratulated myself for making it through the day. My saving grace is normally the blog, but there has been no time to even look at it aside from a quick post at the beginning of the week, never mind contribute a post or reply to comments, and worse still, I’ve been that stressed out that I didn’t even notice. It was only when I received a few messages from some lovely bloggy friends that I realised just how much I needed to catch up on (thanks, by the way).

I want it to be over. It’s only six weeks, but it seems like an absolute lifetime away.

My friend provided the biggest inspiration yesterday. It’s still going to be a tough road ahead, but she’s proof that every small victory is one step closer to winning that war. Daisy has made a swift recovery and has now resumed her daily routine of sleeping, eating and sleeping some more. I still have several pay checks yet to contribute towards my savings. I will re-schedule the meetings. The next few weeks will be stressful, but it is just weeks – it’s isn’t as if I have to wait months, or years for my new life.

And when I’m sitting on a beautiful beach in September, I know the fight will be worth it.

What about you guys? How has your week been?

Those of you who follow my blog regularly will have noticed that my recent posts have been a little more on the negative side. I’m not ashamed in admitting that things have been tough – The Bloke and I have not been as great with each other as we usually are, the building work still continues, The Bloke’s place of work is going through major changes which has left us questioning potential issues that we haven’t had to consider before, Daisy (the cat) is still a regular (and expensive) visitor to the vets while we are trying to adjust her insulin levels and to top it all off I’ve had an awful bout of flu that has knocked me out for almost a week.

Yesterday I received a comment from somebody who has always been extremely supportive of the blog, in which he listed all the different ways in which I was very lucky. While I reserve the right to use my blog to discuss my feelings, both positive and negative (indeed this was the reason for starting the blog in the first place), he made me think about things in a slightly different way. Yes, things have been tough and will continue to be for some time, but I’ll deal with things as I usually do and eventually things will be fine. END_OF_DOCUMENT_TOKEN_TO_BE_REPLACED