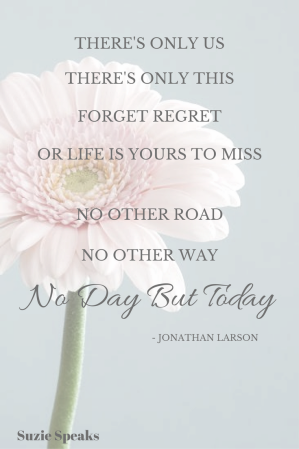 A little while ago I was invited to see a production of RENT at The Old Rep in Birmingham. I’ve always been a fan of the music, having performed a number of the songs as part of a choir when I was at college, but had never seen the musical itself.

Since then, it has become a minor obsession. We watched (and enjoyed) the musical live on the Tuesday, then rented the film on the Wednesday, watched it again on the Thursday and then I went out and bought the DVD on the Saturday, and we promptly watched it again. I’ve owned the soundtrack with the original Broadway cast for years, so we have listened to it in the car, and there hasn’t been a morning over the last few weeks where I haven’t woken up with part of at least one of the songs going around my head in a loop. Despite the fact that I can’t relate personally to many of the themes in the show, there’s just that something about it that both The Bloke and I have connected with. It has become our thing, even though it finished on Broadway years ago. END_OF_DOCUMENT_TOKEN_TO_BE_REPLACED