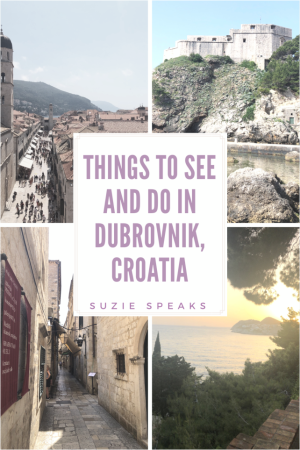 In June I was lucky enough to travel to Dubrovnik, Croatia, for the first time. As a huge Game of Thrones fan I had been eager to visit for a while, but nothing prepared me for how spectacularly beautiful it was. Steeped in history, clean, safe and with population of friendly and lovely people, it’s an absolute must-see.

While isn’t possible to see everything in just a single trip, here are a few highlights that may help when planning a future vacation of your own.

Explore Old Town. Renowned for being one of the most beautifully preserved medieval cities in the world, Old Town in Dubrovnik is a UNESCO World Heritage Site. After undergoing huge renovations to restore it to its original magnificence following the civil war of the 1990’s, the city is a traffic free zone, impressively clean and an absolutely stunning place to see. With historical sights including palaces, churches, palaces and museums, the city also has a wide variety of markets, cafes, bars and restaurants serving local and international cuisine. If possible, try and visit both Old Town during the day and again at night. Many places have late opening times during the tourist season, and it is a spectacular atmosphere in the glorious sunshine and when lit up at night. For the best of both, time your visit a few hours before sunset – you won’t be disappointed!

The roofs of Old Town

Enter through Pile Gate: The beautiful stone bridge leads into the west side of Old Town and down the steps into the Stradun, the main promenade of Old Town. (It’s worth noting that there is also a ramp at the section, making it accessible for wheelchair users). During busier times of the year, this area is divided into two sections in which visitors walk on the right. Click on the images for the full view:

The Entrance to Pile Gate 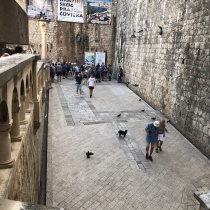 Sit by the Large Onofrio’s Fountain. This fountain is situated in between Pile gate and Stradun. Embellished by 16 stone masks and containing 16 water taps, it was designed and constructed by Italian architect Onofrio di Giordano della Cava. During hot weather, it’s a brilliant place to sit and cool down.

The Stradun in Old Town Dubrovnik

Walk down Stradun. Completely pedestrianised, Stradun is the main street in Old Town, stretching from Pile Gate to the Old Town port. It was once a channel that separated the small island from which Dubrovnik was built on from the mainland, but was filled and now acts as the main promenade and all routes around Old Town lead to this area. Filled with cafes, stores and restaurants and an absolutely beautiful place to walk down later at night as the sun is setting. Be aware that the prices of things will be more expensive along here, and during the main tourist seasons it will be filled with people.

Walk the Walls of Dubrovnik. Open from 8.00am until 7.30pm every day, the Walls of Dubrovnik (Murrales de Dubrovnik) are one of the most spectacular ways to see Old Town and beyond, offering stunning views of the  terracotta roofs, Fort Lovrijenac, neighbouring islands and Adriatic Sea. They are considered to be one of the greatest fortifications of the Middle Ages, and cost 200kn (about £24) to visit. It is worth noting that during the intense heat of summer there is very little shade, so ensure that you are well hydrated. For more information, visit here.

Admire The Old Pharmacy and Cloisters at the Franciscan Monastery. Open every day from 9.00am – 6.00pm, the Old Pharmacy is one of the oldest pharmacies in Europe and is still in use today. The magnificent 14th-century cloisters can be found next to it, consisting of rows of elegant double-pillared columns encircling the Monastery’s inner courtyard. It costs just 5 kuna to enter and tickets can be purchased on the day. Click on the images for the full view: 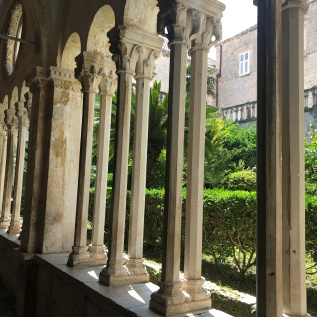 Cloisters at the Franciscan Monastery, Dubrovnik 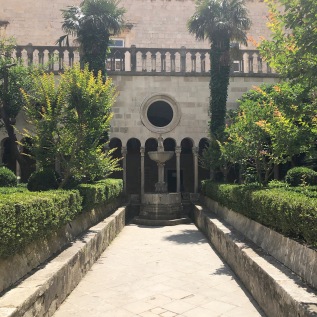 Cloisters at the Franciscan Monastery, Dubrovnik

Walk up the Jesuit Stairs. Any Game of Thrones fan will know the significance of this and expect to hear the word ‘shame’ spoken by tourists at least ten times during your visit. These beautiful baroque stairs can be found next to the Gundulićeva Poljana in Old Town and lead up to the 17th-century Jesuit College and Jesuit Church of St. Ignatius of Loyola.

Explore Fort Lovrijenac and Dubrovnik West Harbour. The fort was built about 1000 years ago in an effort to protect the city from potential Venetian invaders. Like many areas of Dubrovnik, expect lots of steps to access the building, as it sits about 120 ft. above the water. Entrance to the Fort is 50 kn, but if you have purchased a ticket to walk the Walls of Dubrovnik, entrance is free – just keep the ticket from the Wall and show it upon entrance to the Fort. It offers spectacular views of Old Town and the Adriatic Sea, and is the setting of numerous scenes from Game of Thrones. The West Harbour below has stunning clear waters and is also a beautiful place to see the Fort.

Book a Game of Thrones Tour. As the home of Kings Landing, Dubrovnik has numerous filming locations that can be easily accessed on foot. Our tour guide had worked on Game of Thrones from Seasons 2-8 and was incredibly knowledgeable and passionate about the show (and indeed the film industry in the city), explaining how even short scenes are put together using different locations in the same buildings.

Watch the sunset from Park Gradac. Just a ten minute walk from Old Town and offering amazing views of the Walls, Fort Lovrijenac and the Adriatic Sea, Parc Gradac a very quiet area, populated seemingly only by locals walking their dogs and a lovely escape from the busy Old Town areas (and its particularly stunning at sunset). For Game of Thrones fans, it served as the location of Joffrey’s death at the Purple Wedding. 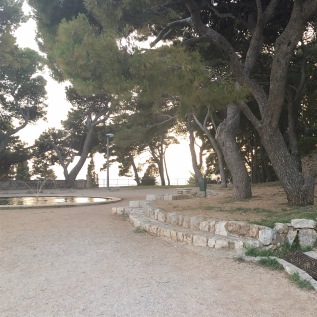 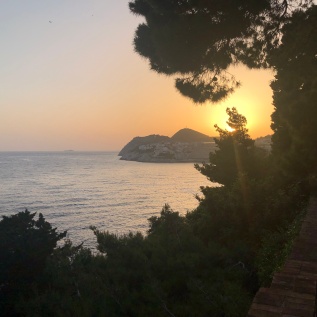 Relax at Gruž Port. This is located about 3km west from Old Town, and is one of the main entrances to Dubrovnik for tourists as the main ferry and cruise ports and bus station are situated here. With lots of shops, cafes, information offices and small parks to explore, it’s a beautiful place to spend the day relaxing or indulging in some retail therapy. To get to Old Town from Gruž, take the number 1 or 3 bus – it takes approximately 10 minutes.

Take the Cable Car up to Mount Srd. For panoramic views of Old Town and beyond, the five-minute journey in the orange cable car whisks visitors up to Mount Srd. It’s not particularly cheap, costing about 170kn for a round trip adult ticket, but well worth it from all the positive reviews! Note: This attraction was closed when I visited, but I wanted to include this for future visitors…